November marks the start of the holiday season but it is also an important health month as well – Lung Cancer Awareness Month.

Lung cancer accounts for more deaths than any other cancer — more than breast, prostate and colon cancer combined — and one of the lowest 5-year survival rates compared to other common cancers. 1 in 15 people in the United States will be diagnosed with lung cancer according to the Lung Cancer Foundation of America.

Lung cancer is most commonly associated with smoking, but other known causes of lung cancer include exposure to secondhand smoke, air pollution, radon and asbestos.

Lung cancer is difficult to diagnose in the early stages of cancer – most symptoms do not manifest until later, making treatment more difficult. Some common symptoms include a persistent cough, shortness of breath, hoarseness, chronic bronchitis, chest pain, unexplained weight loss and bone pain.

Most lung cancer screening exams are performed to find diseases before symptoms begin. Individuals who are at high risk of developing lung cancer, such as daily tobacco smokers or those with family history of lung cancer, may be screened annually.

“Smoking cessation is the single most important step in reducing lung cancer deaths, but even former smokers remain at elevated risk of developing smoking-related lung cancer for several years after cessation,” said TRA radiologist Dr. Jason Jacob. “For patients who are having trouble quitting, and for those who were only recently able to quit, screening with low dose CT improves our chances of finding lung cancer at an early stage, which often means less invasive treatment or a higher likelihood of a cure.” 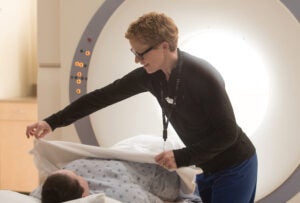 At TRA, we provide low-dose CT Lung Cancer Screening (LDCT) to evaluate if a patient has lung cancer or not. The screening is a non-invasive procedure which evaluates a patient’s lungs for signs of lung cancer. The CT scan can detect small nodules that may be present but not visible on a standard chest x-ray.

“Lung cancer is the leading cause of cancer death in the United States and worldwide, so there’s been a lot of effort within the medical community to find a way to screen for lung cancer,” said TRA radiologist Dr. Brett Mollard. “Our goal is to catch lung cancer at an early stage to maximize the chances of a favorable outcome from current treatment options with an ultimate goal of cure.”

Free yourself from frustration that comes along with requesting appointments, viewing lab results and more.…