Celebrating Over 100 Years of Service in our Community

In 1897, Tacoma’s first known x-ray was used to find a bullet lodged in a policeman’s neck. The x-ray was a crude experiment involving physicians, an electrician, the head operator of the Western Union and a developer. Although the experiments were unsuccessful, it was by no means a failure, according to a report in the Tacoma Daily Register.Thankfully, diagnostic imaging in Tacoma has come a long way since this primitive x-ray.

TRA Medical Imaging Dates Back to 1918

Over the next couple of decades more radiologists made their way to Pierce County and eventually split into two radiology practices. Dr. MacRae, Dr. John Flynn and Dr. Frank Rigos formed what would later be called TRA, while Dr. Ken Gross and Dr. Steven Sanderson merged into what would later be known as MINW. The two practices read for Puget Sound Hospital, Allenmore Medical Center, the Doctor’s Hospital, the Medical Arts Building, and other facilities throughout the area. They even read in Aberdeen, Washington and Ketchikan, Alaska. 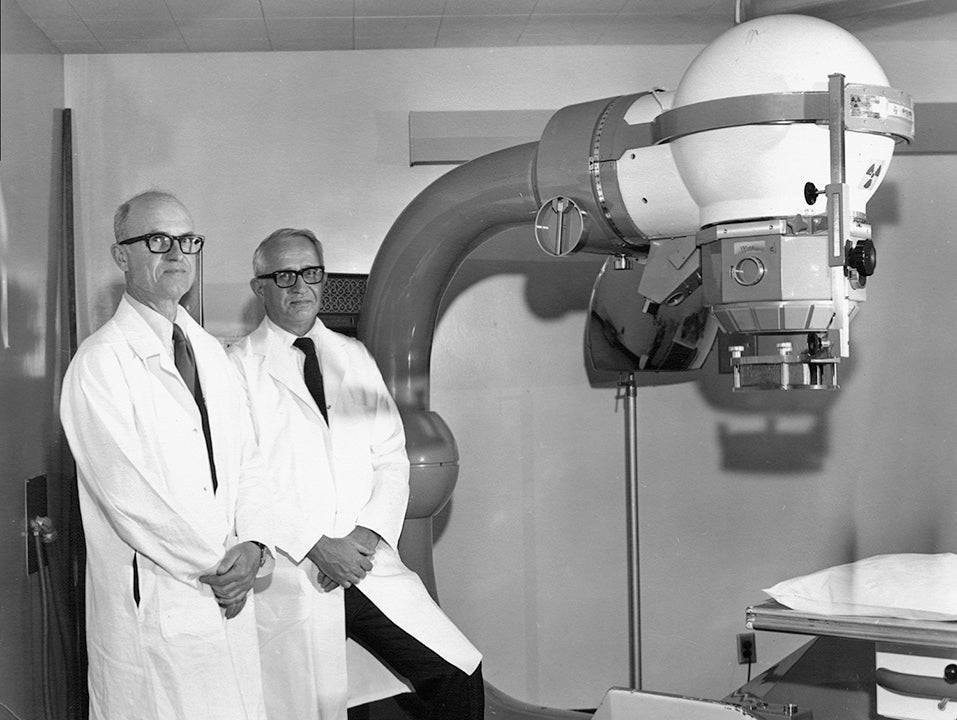 On January 1, 2017, TRA Medical Imaging and Medical Imaging Northwest joined together to better serve the community.  Today, TRA Medical Imaging has expanded its practice to include ten outpatient imaging centers and thirteen hospitals in the South Puget Sound. In the last decade, technology has allowed TRA to provide professional teleradiology services to a number of specialists in Washington State. The ability to read radiology images remotely has allowed TRA to provide high quality and continuity in care for patients.

Since its inception, TRA Medical Imaging has continued its mission to be on the cutting edge of medical technology. In 1973, they were the first to perform ultrasound in the area. Headed up by Dr. Emory Bourdeau, these primitive ultrasound scans were mainly used to detect renal masses and limited obstetrical studies. In the late 1970s, TRA was the first in the area to perform head CTs (body CT would arrive much later). Head CTs were acquired by placing the patient’s head in a rubber diaphragm that would fill with water and act as a conductor.

In 1986, TRA Medical Imaging introduced the first MRI scanner to the area (Tacoma Magnetic Imaging). More recently, in 1997 they introduced Open MRI (Union Avenue Open MRI) to the community, and in 2001 it was Positron Emission Tomography (PET) at TRA Medical Imaging in Tacoma. This modality has fundamentally revolutionized the way providers care for their cancer patients. In 2006, TRA  pioneered a new area of medical care–NeuroInterventional procedures. These highly specialized physicians offer a full spectrum of treatment for stroke, aneurysm and other neurovascular diseases of the brain and spine.

Over the last 30 years, TRA Medical Imaging has expanded radiology services to the community to include new procedures such as angioplasty, needle biopsy, and more recently breast MRI. Breast MRI is an excellent problem solving technology, often used to investigate breast concerns first detected with primary imaging exams, like mammography.

Our Commitment to the Community

In keeping with the vision of the founders, TRA Medical Imaging, in partnership with Multicare Health System and Virginia Mason Franciscan Health, implemented 3D mammography (Tomosynthesis) at the Carol Milgard Breast Center – the first 3D mammography available in Pierce County. The following year, TRA Medical Imaging replaced all mammography units with this new, state-of-the-art technology. This innovative new tool has improved the early detection of breast cancer. 3D mammography, used in combination with traditional 2D mammography, has become the new standard of care for screening and diagnostic imaging. By early 2018, all TRA facilities will offer 3D mammography.

Our commitment to care does not stop with specialized equipment and highly trained physicians. We are committed to our community. That is why we have offered a very generous financial assistance program, lower fees and payment plans. It is our belief that finances should not get in the way of medical care.

TRA Medical Imaging has come a long way, from the first x-ray to 3D reconstruction technology. Over the last 100 years healthcare and technology has dramatically evolved. TRA will continue its dedication to helping health care providers offer the most advanced and compassionate care to their patients.